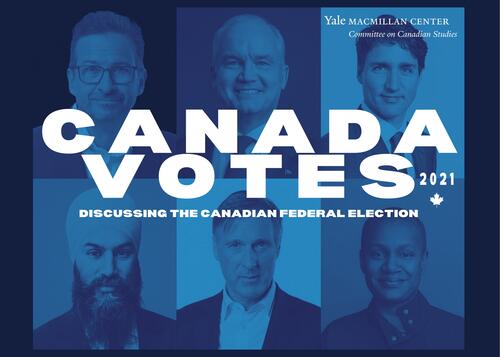 On September 24, the MacMillan Center brought together experts from Canada and the United States for a panel entitled “Canada Votes 2021: Discussing the Canadian Federal Election.” Organized by Brendan Shanahan, a Canadian postdoctoral associate at Yale’s Center for the Study of Representative Institutions, the panel confronted how to interpret the ‘status quo’ election results where the seats allocated by party barely changed. (view video)

The panel began with an overview of the results presented by David R. Cameron, Professor of Political Science at Yale and author of the book Canada in the World: Comparative Perspectives on the Canadian Constitution. Notedly, the Liberal Party will form another minority government after securing a plurality of seats (158 of 338) with a gain of two seats compared to their 2019 results.* Similarly, the Conservative Party will form the Official Opposition with two fewer seats (119). The Bloc Quebecois and New Democratic Party (NDP) each gained one seat (to 33 and 25 respectively) and the Greens lost one to finish with just two seats. While many close races will automatically be recounted, these results are expected to stand.

“One thing worth noting is the view of the snap election as not being desirable —from the view of many people — was reflected in the turnout rate,” said Cameron. “The votes are still being counted … but as of this afternoon, the turnout rate is about 61 percent which is the second lowest in Canadian history.”

Given the remarkable similarity of these results to the last election, the panel was left to interpret what message the election sends to the new parliament. Dr. Shannon Sampert, Canadian political commentator and owner of Media Diva Consulting, presented her interpretation of the success of the far-right People’s Party of Canada (PPC). While they did not secure any seats in parliament, Sampert noted the PPC received approximately five percent of the vote compared to their 1.6 percent result in 2019.

“I do not see this election as ‘more of the same’ for a number of reasons,” said Sampert, before delving into how the results demonstrate a worrying growth of PPC support in the Western Canada. “The PPC and the rise of anti-Liberalism, anti-NDP [sentiment], and regionalism in the Western provinces is something we have to look for.”

Sampert noted that PPC support grew as the party collected disaffected Green and Conservative voters, as well as those galvanized by opposition to COVID-19 public health measures. This growth of right-wing extremism in Canada, she argued, parallels similar sentiments in the United States among Trump supporters and other interest groups on the political right.

On a more international note, W. Andy Knight, Professor of Political Science at the University of Alberta and 2021-22 Fulbright Distinguished Chair in International and Area Studies at Yale, provided an overview of the foreign policy considerations of the election results. He noted the significance of Prime Minister Justin Trudeau’s popularity internationally and provided a list of international leaders who openly supported the Liberal Party.

“Canada has had very good experience in terms of pushing for a rules-based international system,” said Knight. “People outside of Canada view [Prime Minister Justin Trudeau] as being a reliable partner in beating back the challenge to the liberal world order that we’ve had since 1945.”

Knight interpreted the results as a win for potential global action on issues such as climate change and responsibility to protect. Similarly, in the final presentation, historian Brendan Shanahan posited it’s possible for this parliament to achieve bold initiatives on the home front. By looking at historical precedent, Shanahan demonstrated a history of productive minority parliaments.

“With the election of another minority parliament, again led by the Liberals, five of the last seven Canadian federal elections have denied the winning party majority control in the commons,” said Shanahan, before concurring with pundit opinions that the election demonstrates that minority parliaments are now the norm, rather than an exception.

By offering an overview of what other minority parliaments were able to accomplish, Shanahan offered an outline of what this parliament could learn from history. First, he noted they should take the mandate Canadians have given them as an opportunity to work collaboratively. Second, they don’t have to shy away from bold action, as evidenced by the success of historical minority parliaments, such as Lester B. Pearson’s two-term minority in the 1960s that introduced universal healthcare and a national pension plan. Finally, they should take the opportunity to outline a clear line of succession in advance of the next election to optimize any opportunities for future growth.

The event’s combination of panelists representing different disciplines resulted in a multi-dimensional discussion of what this new Parliament will mean for the country. While more panelists felt the election was consequential than not, the question of how much this Liberal minority will be able to achieve now rests on their ability to work with smaller parties.

“We have seen many people argue the Prime Minister called this election out of hubris, and not because the people of Canada wanted this election, but I would argue elections are all about trying to get the temperature and pulse of the country,” Knight said. “This [result] sends a pretty good signal that the people of Canada want [Justin Trudeau] to go back to work and to work with the other parties in order to get things done for Canada.”

Given the history of minority parliaments rarely surviving a full four year term, as pointed out by both Cameron and Shanahan, it might not be long before Canadians are back at the polls.

* Note: at the time of the panel, it was projected the Liberals would take 157 seats. However, mail-in ballots have since been counted and the final tally put the Liberals ahead of the Bloc by 186 votes in the Brome-Missisquoi race in Quebec. Their final result is 158 seats, pending any recounts.