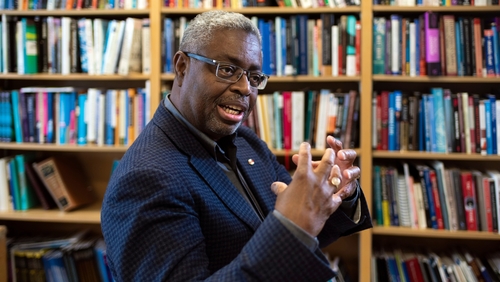 The MacMillan Center’s Canadian Studies visiting chair and Fulbright scholar Andy Knight was recently featured in his local university’s publication, Folio.  He will use his time at Yale to delve into “messy” transition as multiple nations jockey for power.

International politics expert Andy Knight is working on a new book about the changing face of global governance and the transition to a new world order.

Tentatively titled International Organization Today, the book will examine how the world has evolved from a simple system of international governance, driven mainly by the United Nations, to its current state of multilateral organization, said Knight, professor in the Department of Political Science at the University of Alberta.

“In the 21st century, we have not just the UN system, but also the G20, the G7 and a whole bunch of groups, whether formal or informal, all contributing to global governance.”

Knight argues the world is currently in a state of transition, a “new global disorder,” having moved away from the bipolar structure of the Cold War to a multipolar structure — with a number of nations and institutions jockeying for power — which is far more difficult to manage.

“We’re heading towards a new world order, but before you get there, you have to break down the structures of the old order to allow for the creation of new institutions that are now emerging,” he said.

“You see more grassroots movements of people starting to learn how to govern themselves. It’s not going to be easy, because it’s very messy.”

Knight is writing the book as a Fulbright scholar and Distinguished Chair in International Area Studies at Yale University, a one-year appointment he is “deeply honoured and humbled” to take up.

“Yale is probably one of the best places right now to be for this kind of discussion because of the people here,” he said, pointing to renowned historian Paul Kennedy, a powerful influence on his own research.

“Kennedy’s book, The Rise and Fall of Great Powers, is seminal to what I’m doing …. It explains how there were powers in the past that ascended to hegemony but at some point lost their right to be hegemonic­ — they basically fell apart.”

Alex Bellamy, professor of peace and conflict studies at the University of Queensland, Australia, said he has “no doubt Andy’s new book on the global multilateral system will be world-class and vitally important.

“The sort of cool-headed, conceptually driven analysis he is promising is precisely the sort of thing the field needs in order to make sense of the challenges ahead and the drivers of change, order and fragmentation.”

Knight has worked with the UN as an external adviser and in 2013 was seconded to the University of the West Indies to serve as director of the Institute of International Relations. He was chosen by the foreign minister of Trinidad and Tobago as an adviser on foreign mission negotiations, accompanying the minister on a diplomatic mission to Chile.

As director of the Institute of International Relations, he helped to revitalize the 50-year-old institute, raising its research and training profile throughout the hemisphere and globally. He also started the Peace & Post Conflict Studies Certificate program at the U of A.